We are devastated to announce that due to a medical emergency our shows in Edinburgh, Manchester and London need to be postponed until February and March 2020.

We made this difficult decision because we never want to risk the long-term health of any member of the band by asking them to play shows they shouldn’t.

Right now our thoughts are focused on a rapid recovery and return to health, so the re-scheduled shows can be the band at their best.

All existing tickets will be valid: myticket.co.uk/artists/ladytron

We are sorry for any complication this causes anyone who planned to attend.

The new dates are:

These dates are the earliest opportunity when both the band and the promoters could rearrange the UK shows.

The US dates in December will go ahead as originally scheduled.

We were really looking forward to these gigs in England and Scotland and appreciate your understanding. 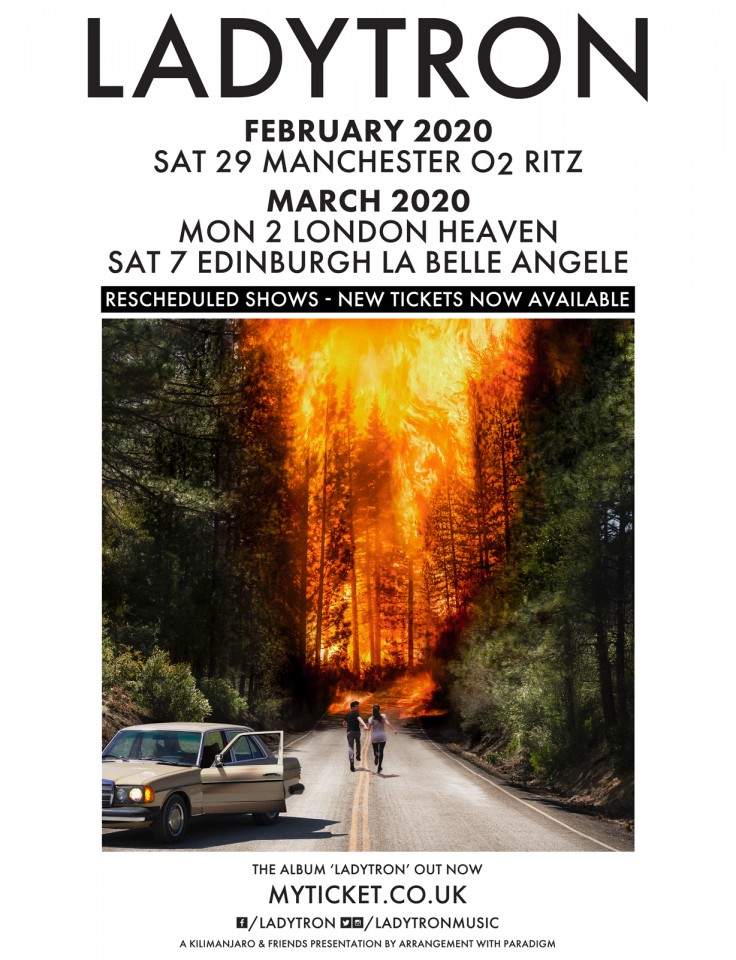 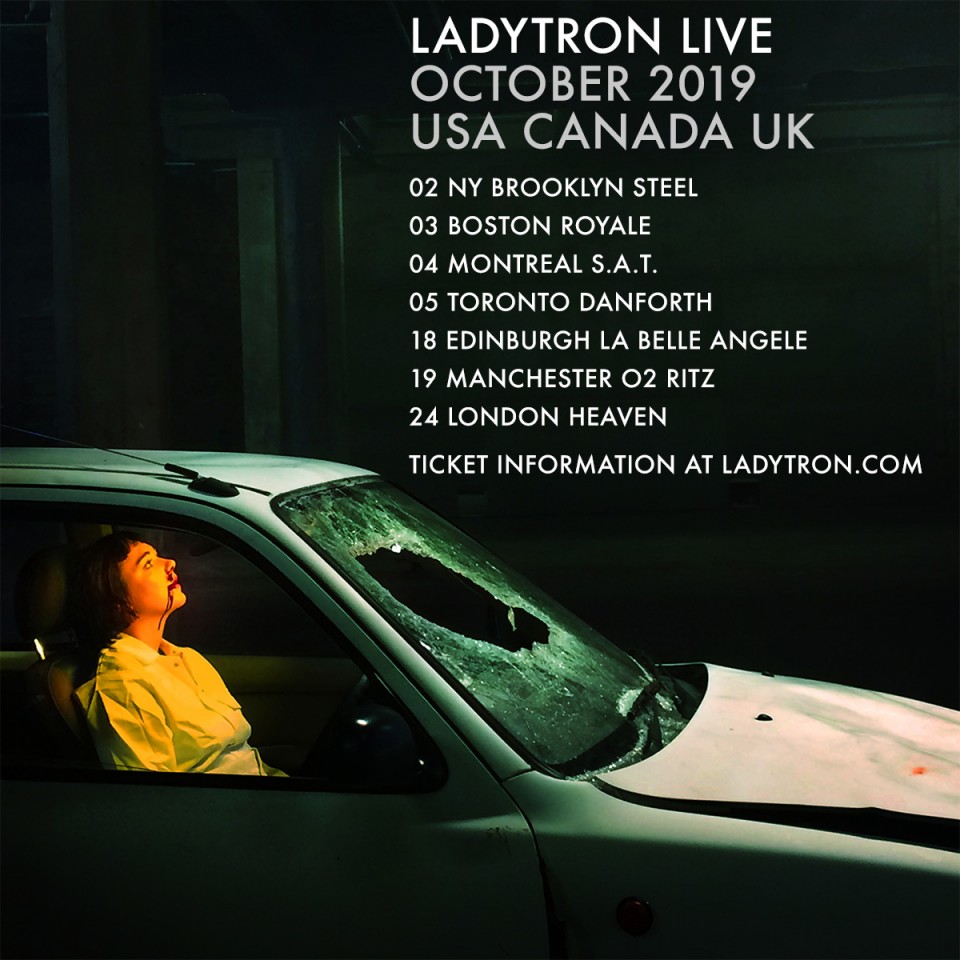 First East Coast North American dates since 2011, plus 3 shows in England and Scotland.

TICKETS FOR ALL SHOWS HERE

IN ADVANCE OF THEIR NORTH AMERICA AND UK LIVE DATES LADYTRON RELEASE HAUNTING VIDEO FOR NEW SINGLE ‘DEADZONE’
Reminiscent of J.G. Ballard’s Crash and video artist Chris Cunningham, the video for “Deadzone”, directed by regular collaborator Bryan M. Ferguson, depicts two car crash victims interlocked in a morbid post-modern dance. The scene opens on two vehicles that have collided head on. As the music picks up, the dancers awaken and gravitate toward each other, tentatively inspecting, and ultimately embracing in a macabre pas de deux.
“Deadzone” rests atop a synth throb but it’s dipped in about three poisons. It seethes with anger and unresolved trauma, Helen Marnie less singing than sputtering out words in a panic, tense to the bones.” -Pitchfork
Marnie, who appears in the video as a passenger in one of the wrecked cars, says, is a nightmarish scenario that depicts the meeting of two worlds. Imagine being in the midst of a dream and being unable to shout or scream or move, and ultimately not knowing whether you are dead or alive. That is the Deadzone.”
“Deadzone” is the new single from Ladytron’s critically acclaimed eponymous sixth album. The album broke a seven year silence, and garnered stellar reviews upon its release.
Q Magazine called it, “Their finest record since 2002’s Light & Magic.” and that “Ladytron achieve near perfection here.” Mojo insisted that in “Dark times, Ladytron soundtrack them beautifully.”
GQ described the album as “Formidable machine music, full of urgency and menace.” while NPR posited that “Ladytron seems enraptured at the idea of change, and of new beginnings in the face of a possible fiery end.”.
TOUR DATES. US/CANADA/UK
October 2, Brooklyn Steel, New York, NY
October 3, Royale, Boston, MA
October 4, S.A.T., Montreal, QC
October 5, Danforth Music Hall, Toronto, ON
October 18, La Belle Angele, Edinburgh, Scotland
October 19, O2 Ritz, Manchester, England
October 24, London, Heaven, England
December 11, Metro, Chicago, IL
December 12, Neptune, Seattle, WA
December 13, Wonder Ballroom, Portland, OR
December 14, The UC Theatre, Berkeley, CA
TICKETS FOR ALL SHOWS

New York, NY, November 29 – Synthpop quartet Ladytron release “Far From Home,” the latest single from their eponymous sixth album which is set for release on February 15. “Far From Home” follows the enthusiastically received “The Island” and “The Animals” which ended the band’s seven-year hiatus.

With its lyrical intrigue and spectral harmonies floating along on an urgent modulating bassline, “Far From Home” is opaque, nonchalant, and very Ladytron, with a vocal evoking escape to a mysterious destination.
“We wave bye bye to the city, its rarity and energy. From the East is how we’ll come, just like the sun, as it breaks the canopy. The weaponry, ideas, flames and reverie…” they sing, as the track builds to a celestial climax.
“Far From Home” is the latest example of Ladytron’s signature mix of blissful electronic pop suffused with unusual themes. “Alongside a few others, it’s perhaps the most distilled Ladytron moment on the record,” says Daniel Hunt. “This was one of the tracks which sounded most like “us”. It is more refined, and vocally more complex but feels most intrinsically us somehow.” The song will be accompanied by a new short film directed by Fernando Nogari, who directed the “The Animals”.Earlier this month, Ladytron played a handful of UK dates. “It was wonderful to be back playing live together again after so long. The three shows went great, we all went away smiling, and it was of course important to see audiences again, some of them would have never been able to see us before,” says Daniel. The Electricity Club agreed, stating that the shows were , “… a reminder of how important they were during the early years of the electronic renaissance – and how important they remain as we look to the next decade of music.”
Distilling twenty years of experimentation into one propulsive album, Ladytron’s new album again pushes the boundaries of electronic pop in invigorating directions with thirteen songs that explore the disquiet of our times. Loaded with their trademark analogue synths propelled by relentless rhythm, Ladytron is the band’s most definitive work, a hypercharged album full of catchy hooks, rousing riffs, sweeping melodies, and thick textured harmonies that radiates a visceral urgency.
Helen Marnie says, “For us, it’s like getting together with an old friend. You’ve both changed, but still have that common ground. Familiarity crossed with excitement.”  “It’s diverse and emotional,” Daniel Hunt adds. “It’s a lot heavier than Gravity, which was an intentionally more sedate, ethereal record. The atmospheres are there, but there’s more urgency underneath.” The album also features guest Iggor Cavalera (Sepultura/Mixhell/Soulwax) on drums.
Ladytron will be announcing US tour dates shortly. 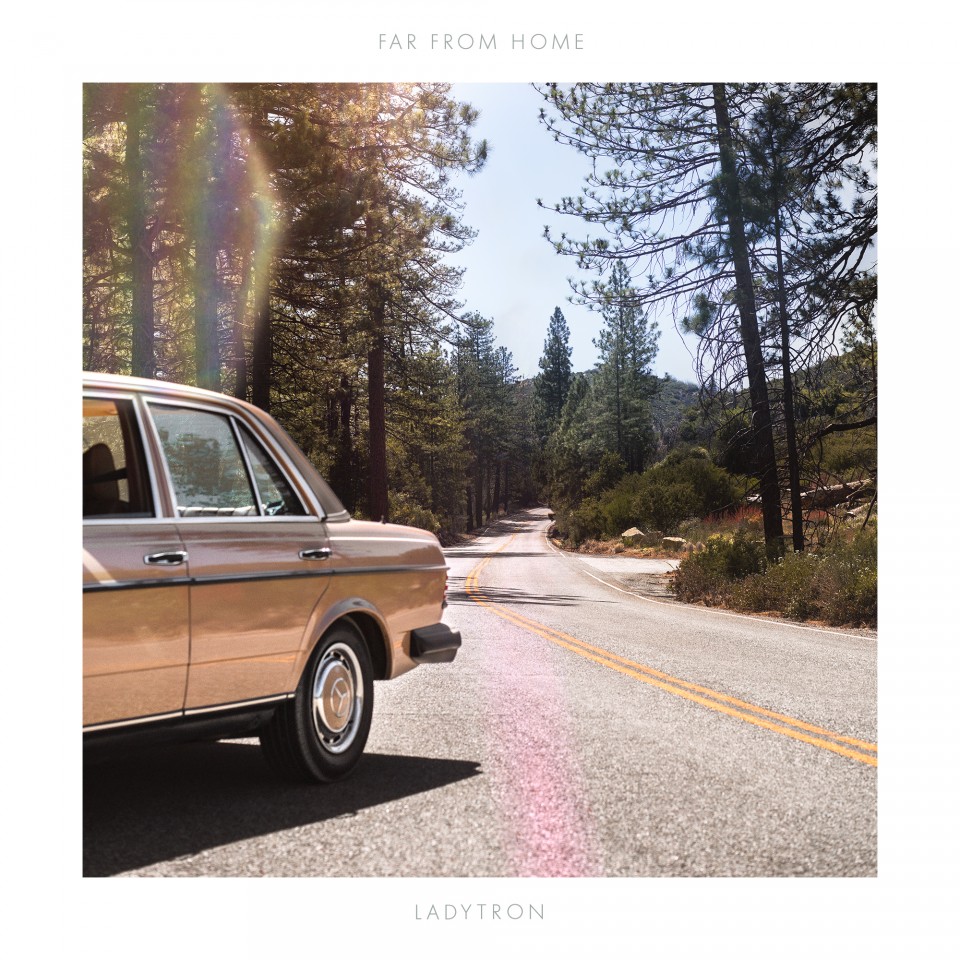 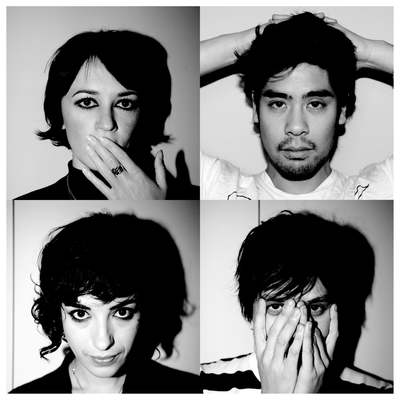 New York, NY, October 10 — On February 15, electronic pop quartet Ladytron release their eponymous sixth album on Ladytron Music via !K7. Ladytron follows the release of two enthusiastically received singles, “The Island” and “The Animals”, which ended the band’s seven-year hiatus. Distilling twenty years of experimentation into one propulsive album, Ladytron again push the boundaries of electronic pop in invigorating directions with thirteen songs that explore the disquiet of our times. Loaded with their trademark analogue synths propelled by relentless rhythm, Ladytron is a hypercharged album that radiates a visceral urgency.
Their self-titled sixth album is the band’s most definitive work to date, full of catchy hooks, rousing riffs, sweeping melodies, and thick textured harmonies. Helen Marnie says, “For us, it’s like getting together with an old friend. You’ve both changed, but still have that common ground. Familiarity crossed with excitement.”  “It’s diverse and emotional,” Daniel Hunt adds. “It’s a lot heavier than Gravity, which was an intentionally more sedate, ethereal record. The atmospheres are there, but there’s more urgency underneath.” The album also features guest Iggor Cavalera (Sepultura/Mixhell/Soulwax) on drums.
The band have announced a handful of UK dates where they’ll be premiering songs from their new LP. US tour dates will be announced in 2019.
UK Tour Dates:
Nov. 02 / Glasgow – QM Union
Nov. 03 / Liverpool – Academy
Nov. 04 / London – The Roundhouse

Ladytron Premiere “The Island”, a “Magnificent Short Film” (CLASH Magazine)
Visual for Second Single from Forthcoming LP Explores Dystopian Themes
“An intense yet beautifully shot clip, it’s a sign that Ladytron don’t just want to match past glories – they want to surpass them.”
- CLASH Magazine
New York, NY, September 5, 2018 — Today, Ladytron premiere their short film for “The Island,” the second single from their forthcoming LP via CLASH Magazine featuring an interview with band members Daniel Hunt and Helen Marnie. The eerie and striking short film is directed by Bryan M. Ferguson, whose film “The Misbehaviour of Polly Paper Cut” opened for David Lynch’s “Blue Velvet” at David Lynch: Painting in Perpetual Motion.
Reminiscent of works by Chris Cunningham (Aphex Twin) and Jonathan Glazer (Under the Skin), and shot in Glasgow, “The Island“ explores the story of a humanoid who awakens, escapes, explores, and is ultimately destroyed. The unnerving images in the short film echo the song’s haunting chorus, icy synthesizers, emphatic drums, and menacing Italo-electro backdrop.
Bryan M. Ferguson, comments: “It implicitly examines today’s current climate and where we’re headed. It explores the alienation and tyranny that we’re forced to swallow on a daily basis. It also offers a sharp commentary on our dual human nature and our present social environment. Overall, the film is a nihilistic look at society’s lack of progress.”
Last month, Helen Marnie who penned the song’s lyrics gave further insight in an exclusive interview with PAPER on how her personal discomfort shaped the making of “The Island” and why there’s a disparity between our actions and our intentions.
Following a seven-year hiatus in March, Ladytron made a triumphant return amid critical acclaim with their lyrically and visually haunting first single, “The Animals.” “The Island” shows again why that praise has been deserved and heightens the anticipation for the release of their full length album in early 2019.
“The Island” is out now and comes with an exclusive non-album track “Tropic of Capricorn”. The single is available on clear, seven-inch vinyl via Pledge.

After a hiatus following the release of their fifth album ‘Gravity the Seducer’, another chapter in Ladytron’s story is about to begin. More news soon.

For booking, licensing & all other enquiries